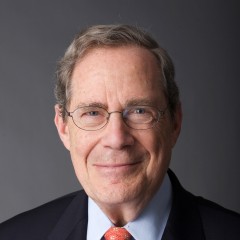 Peter B. Edelman is the Carmack Waterhouse Professor of Law and Public Policy at Georgetown University Law Center, where he teaches constitutional law and poverty law and is faculty director of the Georgetown Center on Poverty and Inequality. He was a law clerk to Supreme Court Justice Arthur J. Goldberg, and worked closely with Senator Robert Kennedy. Professor Edelman served for a time as the Assistant Secretary for Planning and Evaluation at the Department of Health and Human Services in the administration of President Clinton.

Mr. Edelman’s current book is Not a Crime to Be Poor: The Criminalization of Poverty in America, for which he received the 38th Annual RFK Book Award. Previously he wrote So Rich, So Poor: Why It’s So Hard to End Poverty in America, and prior to that he wrote Searching for America’s Heart: RFK and the Renewal of Hope. His article in the Atlantic Monthly, entitled “The Worst Thing Bill Clinton Has Done,” received the Harry Chapin Media Award.