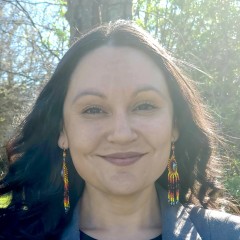 Alejandra Gutierrez is an Equal Justice Works Legal Fellow for NCYL’s Youth Justice Initiative, sponsored by the Morrison & Foerster Foundation. Her work aims to reduce the incarceration and system-involvement of youth by changing systemic responses from punitive to a community, healing-centered approach. In her previous work, she walked alongside youth and families as they navigated the juvenile legal system and supported their engagement and leadership in movement-building efforts. Gutierrez began community organizing in 2009 and has been a part of California’s youth justice movement since 2013. Previously, she was a Labor Union Organizer, Program Director of a grassroots non-profit organization, and Program Associate at a philanthropic foundation.

Gutierrez grew up in Coachella – a small community in California’s Inland Empire. As a first-generation college student, she received her B.A. in Psychology & Social Behavior and Chicanx/Latinx Studies from UC Irvine and earned her J.D. from UC Davis School of Law. During law school, she was a part of the Civil Rights Clinic, the Journal of Juvenile Law & Policy, and interned with the Sacramento Juvenile Public Defender’s Office. Gutierrez is passionate about integrating culturally-rooted healing practices into her work to help bring generational healing. She envisions a world where children and youth of color are loved and their sacredness is restored.