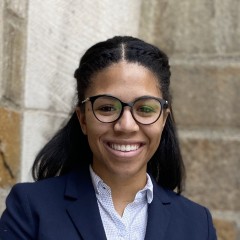 Taylor Jones is an attorney on NCYL’s Debt Free Justice campaign. As a NCYL fellow, Jones’ project aimed to ensure that children experiencing homelessness have access to a free and appropriate public education, including the services, supports, and accommodations to which they are entitled to under local and federal laws. Jones earned her J.D. from the University of Michigan Law School in 2020, where she was a student attorney with the Child Advocacy Law Clinic, as well as the Juvenile Justice Clinic. During law school. Jones was a summer clerk at NCYL where she worked on the Juvenile Justice team. Jones also interned at the ABA Center on Children and the Law. Prior to law school, Jones served as an assistant site coordinator with Eastern Michigan University Bright Futures, where she worked with economically challenged school districts to ensure the academic success of at-risk children. Jones received her B.A. from the University of Michigan where she majored in Political Science and Psychology with a minor in Music.