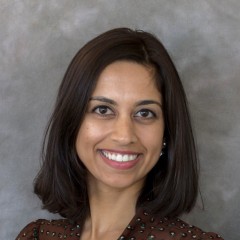 Atasi Uppal is an attorney on NCYL’s Juvenile Justice team and also supports the Education Civil Rights Alliance and FosterEd initiatives. She leads advocacy to enhance educational opportunities for low-income youth and youth of color and works to eliminate the school-to-prison pipeline. Uppal also engages in litigation to uphold the civil rights of children in the education and juvenile justice systems. Finally, she supports NCYL’s “JusticeEd” program and policy work on behalf of youth in the juvenile justice system. Uppal has played a critical role in NCYL’s efforts in Arizona, California, Michigan and New Mexico, as well as on the federal level. Prior to joining NCYL, Uppal was a Trial Attorney at the Committee for Public Counsel Services in Massachusetts, where she represented low-income children and adults involved in state custody, termination of parental rights and status offense cases. Uppal received her B.S. in Brain, Behavior and Cognitive Science and her J.D. from the University of Michigan. At Michigan Law, Uppal was an Executive Editor for the Michigan Journal of Race & Law and worked at legal advocacy organizations focused on child welfare, special education and juvenile justice.